For any invention or literary work to be brought to work, an idea, which is defined as a “thought or suggestion to a possible course of action”, is the first pre-requisite. This is the origin of any invention to be brought into action, however, within the contours of law, this could be seen as something which possesses no legal stance within itself. The Intellectual Property Rights, which inherently inculcate all the legal protections with respect to any intellectual creation of any person, nowhere describe thought as a subject of protection, the possible reason to which can be that ideas are abstract concepts. No legal exclusive right follows from a mere thought or idea rendering it to be monetarily invaluable.[1] In this furtherance, the question which this article embarks upon is that, if at all an idea or thought is so unique and establishes the premise of the invention or literary work(as is protected by the IP Laws), would that be considered at par with an invention and be given protection under any law.[2]

The answer to the question which this article sought to address would be in the negative and an idea, just as is it, cannot be protected. The repercussion of such protection may be unprecedented for it is characterized as being abstract. Secondly, ideas may either be difficult or cannot be proved to exist, but inventions can.

In furtherance of the issues and arguments as mentioned above, we can conclude that at no subsequent stage within India’s legal framework can ideas be protected, and if at all they are protected, it would result in legal ramifications. The Trade Secrets or the concept of secrecy of ideas involved in business regulation is though at the nascent stage of development in the IP laws yet should be taken into account for better protection of the unique business ideas. These intertwined concepts of intellectual property rights should be untangled and be given specific attention with emphasis on understanding how predominant laws on trade secrets of other nations can be embedded within the Indian Legal Framework.

[8]    Pratibha Ahirwar, What to Choose Between Trade Secrets and Patents, (Feb 21, 2019), https://www.mondaq.c om/india/trade-secrets/783558/what-to-choose-between-trade-secrets-and-patents.

RECENT DEVELOPMENTS IN RESPONSE TO COVID-19 IN INDIA 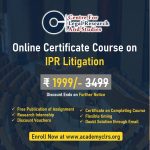